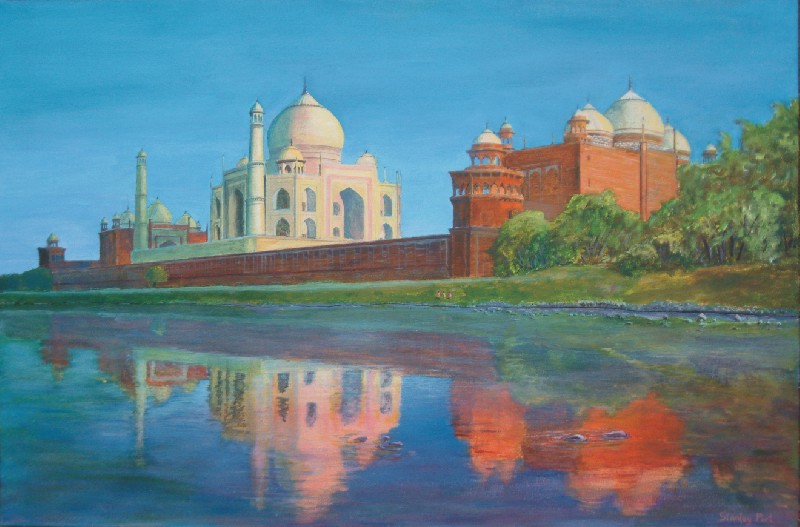 An original painting by Stanley Port.
Acrylics on Canvas: 51 x 76 cm
This painting is FOR SALE: £1495

Taj Mahal River Painting: This is a sunset view of the Taj Mahal from across the River Yamuna in Agra. From the banks of the River Yamuna at sunset, when the startling white marble palace takes on a pinky-golden glow, the beautiful building takes on a magnificent and unusual appearance. It was built by the Mughal Emperor Shah Jahan as a mausoleum for his favourite wife. She had died giving birth to their fourteenth child. Work began in 1632, continued for twelve years, and the building was to be of such dimensions that it would reflect the full depth of his sadness. As an art lover, Shah Jahan took a personal interest in the construction, now renowned as the most beautiful building in the world. The Taj Mahal is flanked on either side by two identical buildings built from red sandstone, one of which is a mosque. A legend has it that Shah Jahan intended that a replica of the Taj Mahal, but in black marble, would be built as his own mausoleum on the opposite side of the river. 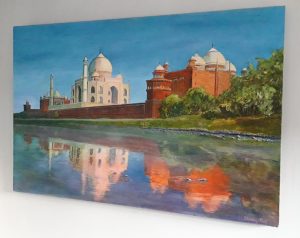