Arundel Castle Set in its Park

Arundel Castle Set in its Park

An original painting by Stanley Port.
Acrylics on Board: 40 x 50 cm
This painting is FRAMED and is FOR SALE:   £120

This painting shows Arundel Castle set within its fine gardens and extensive park. The castle occupies a hill within the South Downs in Western Sussex. Building started on Christmas Day in 1067. The Keep and motte date from shortly after. The Dukes of Norfolk have owned the castle for much of the last 850 years. It was extensively damaged in the English Civil War and much of the castle was rebuilt in Victorian times between 1870 and 1890. Today the castle is owned and occupied by the 18th Duke of Norfolk, and it is open to the public from April to October each year. It has been extensively used for filming, for example for Dr Who in 1988, for The Madness of King George in 1994 and for The Young Victoria in 2009. 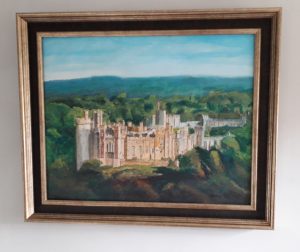